On July 17-20, 2017, Piikani community members and First Mile researchers held a 3-day Piikani Cultural and Digital Literacy Camp focused on the community’s Past, Present and Future. Grade 9 students learned Blackfoot culture while camping on the land. They documented camp activities using digital video cameras, which was an entry point to learn about digital literacy. In classroom sessions held before and after the camp, the students received training in creating digital content, digital stewardship, cultural appropriation, testing online information, representing ourselves and others online, and keeping our content safe. 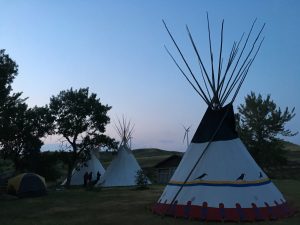 This pilot project was designed as the first stage of an ongoing program that will blend Piikani cultural knowledge with learning about digital literacy. A total of 10 grade 9 students and 10 facilitators participated in the workshop, along with a number of community members who contributed in different ways, from storytelling and fire-making to hosting traditional hand games and cooking. 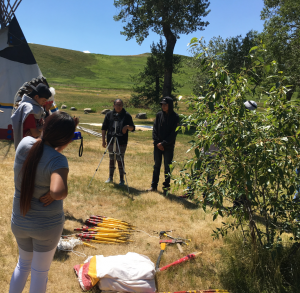 The camp focused on Blackfoot teachings from Elder Herman Many Guns, and also included group discussions, hands-on activities and field trips. Students documented the process of putting up tipis, visited a traditional eagle catcher, travelled to Napi’s Playground to hear traditional stories, and learned about economic development projects happening in the community, such as a Band-owned wind turbine, ranch and gravel pit. Students will be editing the footage they collected to create three videos that they will showcase to the Piikani community at a public event in October 2017.

The project also generated two resources for community and researchers to build on and conduct their own workshops: a facilitator handbook and a participant handbook. Once they complete their videos and post-camp activities, students will receive Career and Technology Studies (CTS) course credits. 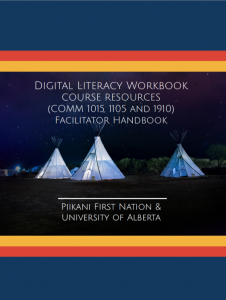 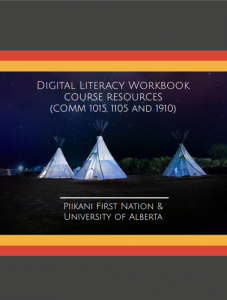 This workshop was made possible through funding from the First Nations Innovation Project (Social Sciences and Humanities Research Council) and support from Peigan Board of Education and the Youth Empowerment Services (Y.E.S. program), which receives funding support from EverActive Schools. We also acknowledge and thank colleagues at the Faculty of Extension at the University of Alberta, and at the First Nations Technical Services Advisory Group (TSAG) for their support for and input into planning for this project. Graphic design and layout for the project workbooks was done by Master of Arts in Communications & Technology student Hanne Pearce.

The team partners had a great time at the pilot camp. Through surveys and exit interviews, we received good feedback from participating students and facilitators on how to build on the program for next year.