Members of Maskwacis First Nation in Alberta can now access free WiFi, thanks to the efforts of local tech entrepreneur Bruce Buffalo.

Bruce has developed a system that offers four free access points in his community. Community members can connect to the network through a web-based gateway, which also offers some content filtering (blocking inappropriate content). Bruce used his home Internet connection as a network gateway, and then built WiFi repeaters to distribute the signal to the surrounding area. Users can connect to the Internet, and to apps like social media and voice-over-IP telephone, by logging in on their devices. The multi-point system now broadcasts a WiFi signal from four antenna located at his uncle’s house, his sister’s house, the community radio station (Hawk Radio), and the local Friendship Centre. 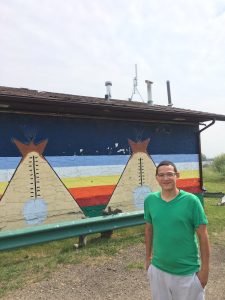 Bruce stands outside WiFi site #4, at the Maskwacis Friendship Centre.

Bruce said that he set up this system to allow community members to access essential services otherwise unavailable or expensive. Cell phone coverage is not available in much of Maskwacis, and telephone and Internet services are expensive for many community members, who lived on fixed incomes. Safety was a key concern: Bruce wanted to make sure that people had access to a phone line when needed. Along with voice-over-IP telephone calls, people can also use the system to connect through social media, and to surf the Internet. At present, the system is fully funded by Bruce and from donations he received to pay for equipment and bandwidth. He received some equipment donated by Swiftfox.net and Velocitynetworks.ca , two Wireless Internet Service Providers (WISPs) based in Southern Alberta. 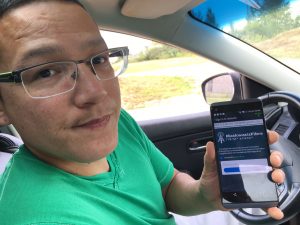 Bruce shows the log-in webpage for his community WiFi system.

Setting up and maintaining this free community service was a challenge. A 30-minute documentary by Al-Jazeera English Television documents Bruce’s efforts to set up and test his pilot system. Since that documentary aired, Bruce has continued to pursue the project. He received donations from viewers of the documentary to pay for equipment and bandwidth, and is in discussion with local leadership about how to sustain and expand the system.

Congratulations Bruce for setting up this First Mile community network! 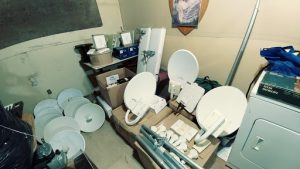